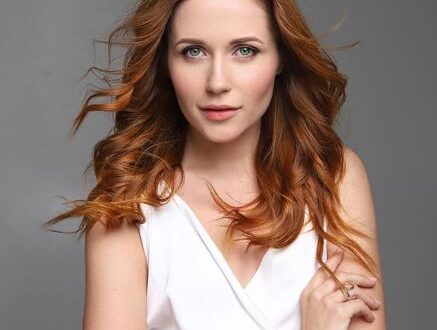 Natalia Denisenko is a Ukrainian actress starring in popular TV series. She has experience in voiceover and dubbing, as well as as a TV presenter.

Natalia Aleksandrovna Denisenko was born on December 17, 1989 in Chernigov.

As a teenager, the actress had a lot of boyfriends, whom she made fun of. For example, she made an appointment on the rampart near the 13th cannon. The guy came to the place and realized that there were twelve cannons.

In 2012 she graduated from the Kiev National University of Theater, Film, and Television named after I.K. Karpenko-Kary. Unlike other theatrical institutes, in this educational institution, students were prepared in advance for filming. For example, they showed how the camera “sees” a person. On close-up shots, you should not allow yourself to make sudden movements, but on medium shots, you can “twitch”. It came in handy even for Natalia, although she is not an actress by education, but an announcer and television presenter.

After high school, she released an author’s program about the life of Coco Chanel in the series “People who changed the world” and a documentary program “The life of ordinary people.” Denisenko personally directed and edited them. She was preparing for the biography of a journalist who talks about movies, not plays in it. But fate decreed otherwise.

Students from the acting department were persuaded to star in the thesis, then the friends invited them to the casting, and so the girl got into the industry.

The actress is happy in her personal life. Natalya met her future husband Andrey Fedinchik on the set of the series “Clan of Jewelers”. Denisenko doubted whether it was worthwhile to give way to this relationship, because at that time the man was married. She herself was free and enjoying life.

Denisenko’s choice was influenced by the book “The Art of Love” by Erich Fromm, just read . She realized that it is important to be close to the person you feel, and Fedinchik was just that. A real man who looks after himself, but in moderation, and also has a mind and character.

The wedding was played in the Maldives on April 1, 2017, and in September, the son Andrei Jr. was born. There are no other children in the family yet.

In Natalia’s profile on Instagram , you can find photos from film sets, family photos with her son and even in a swimsuit.

Denisenko admitted that now every day she thanks heaven for the fact that fate made her an actress. The work gives her pleasure, although she has to shoot 12 hours a day, sometimes seven days a week.

Her first work was the mystical series “The Dark Diaries” (2011) – about a mysterious city that is difficult to get to and from where it is impossible to get out.

In 2015, Denisenko starred in the series “The Clan of Jewelers”. She got one of the main roles – Zoya Movchan, who, together with her lover, found herself at the epicenter of the confrontation between two criminal families. According to the actress, it was a modern version of Romeo and Juliet.

Natalia was interested in playing her heroine, because Zoya is not like her at all: calm, restrained. True, at first the woman doubted whether it was worth taking on the project, especially since the producers were looking for a blonde. But she was forced to come to audition, and everything worked out.

In 2018, the filmography of the artist was replenished with the film “A Village Story”. According to the plot, the capricious “major” Dasha gets into an accident, after which her life changes. The heroine is abandoned by a guy who, as it turns out, cheated on her for a long time. The car mechanic Aleksey comes to the aid of the girl – despite the fact that earlier because of Dasha he lost his job. The series starred Belarusian actor Kirill Dytsevich, as well as Victoria Varley, Roman Cherny, Oleg Savkin.

In February 2019, Denisenko was cast in the large-scale costumed melodrama “The Serf “, leaving 80 equally beautiful Ukrainian actresses behind. Her heroine, sexy theater artist Larisa Yakhontova, attracts men with a bold and cheerful character.

Except for Natalia, no one was able to convincingly embody this image. The actress got the role by accident: she went to auditions for fun, read the script, and fell in love with the character. When Denisenko was approved, she began to worry that her son would be left unattended. I had to run to him in between filming.

In April 2022, the premiere of the detective series “Sasha’s case” about the investigator Sasha Gurskaya, who is successful at work, but has problems in her personal life, took place. The husband and daughter are constantly in conflict, and the heroine is torn between them, trying to please both sides. In addition to Natalia Denisenko