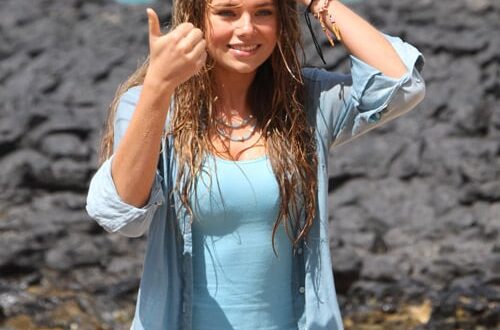 After the release of H2O: Just Add Water, Indiana Evans, who played the mermaid singer Bella, woke up famous. The main role in the adventure melodrama “Blue Lagoon” secured star status for the Australian actress and singer.

Indiana Rose Evans was born in Sydney, Australia in the summer of 1990. Indy’s parents from an early age discovered the girl’s talents and creativity. The daughter sang, danced, painted. At the age of 5, the little artist gave home concerts to her family and guests.

At the age of 7, her parents took her daughter to a choreographic school, where Indiana Evans learned ballroom dancing, tap dance, and jazz. After 3 years, the girl starred in an advertisement, and for the fee she bought a set of drums, which she played with pleasure, having fun with her brother and sister and numerous friends.

To learn how to play other instruments, Indiana Evans took music lessons. Then the girl “saw” herself as a model and went to auditions for agencies, but after appearing on the screen in a commercial, Indy set a goal – to become an actress.

In 2000, Indiana Evans focused on her acting career and went to the Newton School of the Performing Arts. Soon the young actress was invited to appear in the series, and she switched to correspondence education. Evans studied at Newton School until the age of 15.

Indiana has not forgotten about her second hobby – music. The first music albums that Indy acquired were those of Michael Jackson and the Spice Girls.

The cinematic biography of Indiana Evans began when the girl was 13 years old. In 2003, she starred in the television series All Saints as Millie Roberts. The blonde and blue-eyed actress with an angelic appearance was lucky: the audience noticed a talented girl. Indy managed to create a memorable image on the screen and the producers liked the freedom in front of the cameras.

In the same year, the blond Australian was involved in the second long-running project – the melodrama “A Dog Called Snobs”. 13-year-old Indiana Evans was entrusted with the main role – Abby Oakley. The series aired from 2003 to 2004.

The Little Mermaid Bella performed by Indiana Evans – a songstress and a vulnerable soul – found her way to millions of viewers’ hearts. And if you consider that dozens of countries in America and Europe bought the rights to broadcast the series, then Indy woke up world-famous. The audience for “H2O: Just Add Water” was 200 million people.

Working with renowned actors improved Evans’ skills, and she also managed to demonstrate a second talent – musical. In February 2011, the soundtrack was released on iTunes: all songs were performed by Indiana Evans. She later released an album with songs from the film.

In 2004, at the dawn of her career, the young artist met Sharney Vinson and Jody Gordon on the set. The girls are still friends today.

The miniature Australian beauty (Evans’s height is 1.65 m and weighs 47-48 kg) does not suffer from a shortage of fans. She met with colleagues Reese Wakefield and Lincoln Lewis. After filming in Blue Lagoon, the on-screen romance with Brenton Thwaites spilled over into real life, but soon ended.

Rumor has it that Indiana Evans and Angus McLaren are having an affair. There are photos of them together on Instagram. According to other sources, Indy and Angus are friends. Journalists attribute the Australian relationship with actor Alex Williams.

In September 2016, the second season of the series “Secrets and Lies” started on the ABC channel, where Evans played Natalie Crawford. But in the spring of 2017, ABC closed the project.