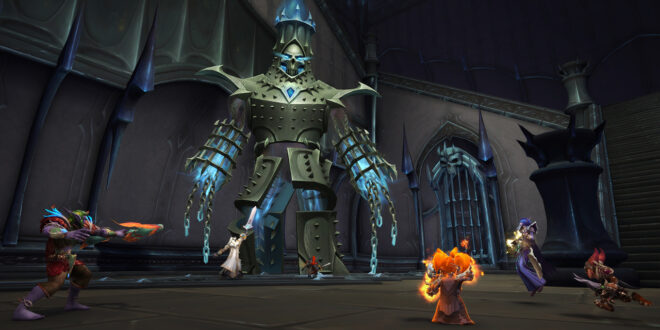 It is an impressive adventure experienced WoW players must participate in. The raid takes place in Torghast, where you will have to encounter and fight nine bosses to meet the most powerful Sylvanas Windrunner. Do you remember the background settings and events that have taken place before this specific raid?

The Jailer got bound within the Maw. After that, his armies keep growing as he expands the boundaries to take advantage of Oribos. At the same time, Bolvar sends his remaining allies to confront the Jailer in Torghast.

What can you expect from the raid? Maximum tension, crazy fights, risks, and emotions will overwhelm you. Be ready to take the maximum of your skills so that you could fight nine bosses, getting a chance to encounter the strongest and the most powerful one. Who are these nine warriors? Check out a few quick facts about each one of them with Buy-Boost.com so that you could be ready to accept the challenge on your way to success.

The Tarragrue is the initial boss you will meet at the current raid. It is the relentless beast of the Jailer, who has been investigating the halls of the area right from the very first spire was raised. An unlimited number of characters lost their soils dealing with this horror that is searching for the mortal tournament. Is it easy to fight the boss? Surely, no, but there are still numerous guidelines that will help you succeed. First of all, you should not select the anima powers, which can block your allies. Besides, it is critical to make sure someone takes the feat’s immunity power. Forget about fears and use spread-out tactics to gain the desired result. Keep in mind that your key task is to get rid of the boss’s anger fast. Following the tips and tricks, you have an opportunity to fight the boss, moving to the second level.

The Eye of the Jailer

Once you succeed with the first boss, you are ready to progress to the second one. He is known as the Eye of the Jailer, and it is also quite powerful. How did he appear in the Shadowlands? When Azeroth was still young, Odyn traded his eye to scrutinize the Shadowlands. However, he was deceived, as the Jailer intertwined with the Eye to accomplish his ambitions and serve for his benefit.

Due to the unwavering gaze, the Eye of the Jailer helps to reveal all the secrets of his domain. Some players are convinced that it can intervene in other domains, as well.

However, irrespective of his power, there are numerous ways to deal with the challenge and move to the third boss. There is always an opportunity to take advantage of the grappling hook that will eliminate the impact of the giant laser. Additionally, players can apply bloodlust or heroism when the health level drops to 25% so that they can survive throughout the final battle.

Are you ready to encounter the third boss of the Sanctum of Domination? The dark pact Sylvanas struck with Val’kyr forged her link with the Jailer. However, for a long time, the winged sisters were devoted and loyal to the Dark Lady. At times, they were ready to give their lives for her. At this stage of the game, Sylvanas calls her number nine and challenges her to fight on her behalf one last time.

Irrespective of the impressive wit, power, and enthusiasm, the Nine can easily be defeated by an experienced WoW player. At this point, it is critical to remember that damaging two bosses simultaneously is halfway to success. Take maximum advantage of your skills and tools to overcome the Nine and be promoted to the next boss. strategy Guide: Quick Version

When it comes to the fourth boss, there are numerous options, and Remnant of Ner’zhul is one of them. Aimed to annunciate the reign of Jailer on Azeroth, Ner’zhul was considered unworthy in the eyes of his master. Thus, instead of fighting the character, the player will encounter only the remnants of his fallen soul. They were encased in the shadow steel and sentenced to the eternal fight for failure. Those players who meet him, will surely participate in his sufferings.

It is another option for the number four boss the player will have to face during the game. He is one of the most powerful tormentors who has never met anyone he could not overcome. Generally, Soulrender Dormazain is the boss that makes an effort to take out the animal from the Torghaus captives in order to fuel the warriors of the jailer. Although the boss seems to be almighty, there are numerous weak points the player can find to overcome him. Additionally, it is inevitable to mention that the last victim of the boss turned out to be resistant to traditional methods, so it will take him much more time and effort to deal with bold players.

It is one of the cruellest and most bloodthirsty bosses in the game, who is ready to do everything possible to make the traps in the area more exquisite and dangerous. There is no way a cowardly player overcomes him and moves to the next stage, as his sadistic tricks are known among the players. He enjoys the screams and whipping of the victims, so he will surely relish yours as well.

Guardian of the First Ones

The closer you approach the main boss, the more desperate and devoted bosses you will meet. It is another character that utilizes its remaining powers to destroy anyone who would make an effort to reveal his secrets.

There is no way you underestimate the strength and loyalty of this boss. This character features the power of the Torghaust and can freely use it to the full extent.

The last but one boss is characterized by unlimited power and extraordinary schemes that will surely prevent you from the final encounter. However, if you are ready to accept the challenge, you have an opportunity to meet the Dark Lady.

Finally, you can fight the powerful Queen that will unleash all her power to prove her superiority.